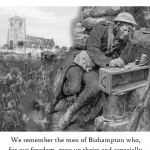 At the Heritage Open Day event on 12 September 2015 in the village’s St James Church, we published and released for sale our book – Those That Served – on the lives and service careers of the 52 men of the village who served their country – and gave their lives – in World War I, plus the one man from the village who died in World War II.

The release was launched by Colonel John Lowles, CBE, a previous Commanding Officer of the Worcestershire Regiment and past Director of the Mercian Regimental Museum in Worcester.

This book, funded by the Heritage Lottery Fund, is a 200-page A4-sized volume, is on sale at £10.00  Apart from the histories of the men, the book contains much background information, and – particularly for those that lost their lives, details of the actions on the day on which that occurred.